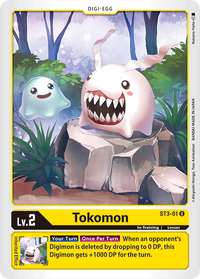 Yellow contains an abundance of holy Digimon, such as Digimon with angelic or divine beast motifs. Containing mostly Digimon belonging to the Vaccine or Data Attributes, Yellow also contains high-level Digimon belonging to notable groups such as the three Celestial Digimon and the seven Holy Digimon. Common Types found in Yellow Digimon include Angel and Holy Beast.

Yellow is a control-based Colour. Being the sole owner of keywords such as <Recovery +x (Deck)> and <Security Attack -x>, Yellow is adept at prolonging the pace of the game by manipulating the player's amount of Security Cards while decreasing the Security Attack count of opposing Digimon to prevent the opponent from easily destroying the player's Security. In addition, Yellow offers a unique form of removal in which many cards possess effects capable of lowering the DP of opposing Digimon. Not only does this allow the player to more easily destroy the Digimon in battle, Digimon brought down to 0 DP are automatically deleted, providing a reliable source of removal. Common keywords in Yellow include <Recovery +x (Deck)> and <Security Attack -x>.

Yellow is particularly adept at manipulating the player's Security, being able to easily increase, decrease, and replace Security Cards at whim. Yellow contains many effects that allow the player to increase or decrease the number of their Security Cards easily, containing cards like [BT1-060 MagnaAngemon] or [BT2-034 Salamon] that are able to use <Recovery +1 (Deck)> to increase Security and cards like [BT3-034 {{{2}}}] and [BT4-104 WarGreymon] that add Security Cards to the player's hand as a cost for great effects, all the while increasing their hand size. In addition, some cards grant the player an even finer control over the contents of their Security, such as [BT1-087 T.K. Takaishi] allowing the player to see the contents of their security stack and replace any one card with another one, or [BT3-041 Cherubimon] allowing the player to directly choose any card from their trash to place in their Security.

In addition, Yellow contains many cards carrying effects that decrease the DP of opposing Digimon for one turn, such as [ST3-14 Heaven's Charm] or [BT1-061 Mistymon]. Although not permanent, these small decreases in DP can potentially allow the player to attack and defeat an opposing Digimon that would otherwise have too high of a DP, and even delete weaker Digimon. Perhaps more devastatingly, cards such as [BT2-041 ShineGreymon] are able to subtract DP multiple times at a wider scale, allowing the player to either focus on bringing down the DP of a larger threat or to spread out the targets across a wider board. In complement to these effects, cards like [ST3-04 Patamon] and [BT1-049 Labramon] grant bonuses to the player when opposing Digimon are deleted in this way.

Yellow is also notable for containing various effects that allow the player to swarm the field with lower level Digimon, as well as lower level Digimon with strong effects that complement this strategy. Notable examples of these effects include [BT3-039 Angewomon] and [BT5-045 Crusadermon], which, although without the lack of a limit, allow the player to play lower level yellow Digimon directly from their hand at no cost. This is particularly useful in conjunction with low level, but high cost Digimon such as [BT4-038 BushiAgumon] or [BT4-115 Lucemon], which come with powerful effects and a high cost that could be negated by being capable of being played at no play cost.