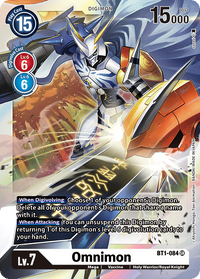 White (白 Shiro) is one of the seven Colours in the Digimon Card Game. It was first introduced in BT-01: Booster New Evolution as an auxiliary Colour to the game.

White Digimon are reserved for high level Digimon that are rare and extraordinarily powerful, often being Mega level Digimon formed from a fusion between two other Mega Digimon. The Digimon contained in White are usually important protagonists and antagonists that play a major role in various pieces of Digimon media, and White Tamers and Options depict the characters and attacks that are associated with these Digimon.

Being few and far between, White cards do not serve as a basis for a deck of their own. Instead, White cards serve as generalized support cards that can be used in multiple different decks of other Colours. White Digimon, mostly being powerful Lv.7 cards, are usually capable of Digivolving from Digimon of two different Colours, such as [BT1-084 Omnimon] being able to Digivolve from Digimon that can be of either Red or Blue in Colour. These Digimon can thus be used in a variety of decks as powerful finisher-type cards. Similarly, White Tamers and White Options have effects that can benefit multiple Colours at once, focusing on aiding a specific playstyle rather than aiding a specific Colour itself.

The Eosmon deck focuses on playing multiple [Eosmon] and also setting up [BT6-092 Menoa Belluci] to inhibit some of the functions of the opponent's tamers.

Digimon associated with [Diaboromon] focus on spawning [Diaboromon Tokens]. The Digimon focus on playing multiple Digimon with the same name, and using the Tokens to facilitate those conditions. Many of this deck's boss monsters are White Digimon.