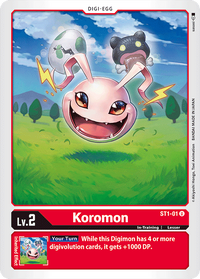 Red is notable for containing many cards associated with the protagonists of the various Digimon anime series, such as their partner Digimon or the characters themselves as Tamer cards. The Digimon cards found in Red are commonly Digimon associated with fire, dragons, or simply Digimon that are red in colour. Common Types found in Red Digimon include Dinosaur and Dragonkin.

Red is primarily a very aggressive Colour, containing many effects that emphasize on attacking, decreasing the opponent's Security Cards, and deleting the opponent's Digimon. Common keywords in Red include <Security Attack +X>, <Piercing>, and <Blitz>.

As a very aggressive Colour, Red receives many effects that gives it an advantage offensively. Cards like [ST1-03 Agumon] and [BT1-015 Greymon] grant effects that allows a Digimon to gain DP when attacking, allowing it to defeat an opponent's Digimon or Security Digimon cards more easily. In addition, the presence of <Blitz> on many Red Digimon like [BT5-019 Shoutmon DX] allows the player to attack even if the turn would be passed to the opponent after Digivolution.

Red also contains many effects that allow the player to destroy the opponent's Security Cards more easily. One common staple in Red is the abundance of <Security Attack +X> effects as both Main Effects and Inherited Effects, allowing a Digimon to increase the amount of Security Cards it checks in one attack. The combination of cards such as [ST1-07 Greymon] and [BT4-015 Volcdramon] that contain <Security Attack +1> as Inherited Effects to boost offensive potential and cards such as [ST1-11 WarGreymon] that contain <Security Attack +X> as Main Effects allows the player to destroy a large amount of Security Cards in one attack. In addition, Red also possesses a fair amount of cards containing the <Piercing> effect, allowing a Digimon to check Security even if it attacked an opposing Digimon.

Beyond offensive capabilities, Red is also adept at deleting the opponent's Digimon through effects found on both Digimon and Option cards. Although limited to targets below a certain DP threshold, cards like [ST1-15 Giga Destroyer] and [BT3-012 Aquilamon] possess effects capable of deleting opposing Digimon. More notably, Red also contains the Option [ST1-16 Gaia Force], which, at a higher cost, allows to player to deleting any opposing Digimon with no limit. In addition, cards like [BT2-020 Gallantmon] take advantage of this mechanic by increasing the number of cards in the opponent's trash through deleting opposing Digimon, and gaining bonuses depending on this number.