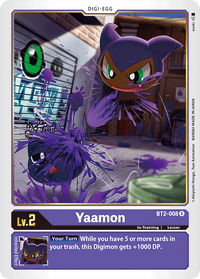 Purple (紫 Murasaki) is one of the seven Colours in the Digimon Card Game. It was first introduced in BT-02: Booster Ultimate Power as the sixth main Colour in the game.

Purple contains an abundance of Digimon associated with the darkness, such as demonic or ghostly Digimon. Because of this trait, Purple often includes Digimon that serve as antagonists in the various Digimon anime series, as well as the Digimon belonging to the Great Demon Lords group. Common Types found in Purple Digimon include Fallen Angel and Demon Lord.

Purple is a combo-styled Colour featuring elements of both control and aggro, and heavily revolves around the trash. Purple cards make heavy use of effects that delete allied Digimon in exchange for strong effects, in conjunction with many Digimon carrying [On Deletion] effects that benefit from being deleted. In addition, Purple also carries an extensive number of effects that play Digimon from the trash onto the field at no Play Cost, as well as powerful tools of control. Common keywords in Purple include <Retaliation>.

Self-Deletion and Manipulation of the Trash

Many Digimon cards in Purple, especially Lv.3 Digimon, carry [On Deletion] effects, examples including [BT2-070 Tapirmon] and [BT3-079 Tsukaimon]. This property is complemented by many Purple effects that delete allied Digimon. Cards like [ST6-15 Death Claw] and [BT2-077 Kimeramon] offer powerful effects at the expense of deleting an allied Digimon, but this loss is slightly mitigated by acting as a proactive way for the player to activate the [On Deletion] effects of their Digimon.

Purple's self-deletion effects play into one of its core mechanics, that being the manipulation of the player's trash. Besides deleting allied Digimon, Purple has a variety of ways to increase the number of cards in the player's trash, such as discarding from the player's hand or deck through cards like [BT3-006 DemiMeramon] and [BT2-068 Impmon] respectively. Many cards then benefit from the possession of a large trash size. Certain cards, such as [BT2-111 Beelzemon], have effects that only activate if the trash size is above a certain threshold, and cards like [BT2-090 Matt Ishida] allow the player to add cards in their trash to their hand, effectively treating the trash as a second hand. Even more notably, Purple has a large amount of cards, such as [BT2-108 Night Raid] or [ST6-16 Nail Bone], that can directly play Digimon from the trash to the field without paying its Play Cost, allowing for strong swarm potential. This can be further capitalized by a card like [BT4-087 Anubismon], which grants <Rush> to Digimon that are played from the trash.

Purple contains many ways of control by hindering the opponent's movements and deleting their Digimon. Cards like [BT4-088 DanDevimon] and [BT2-079 VenomMyotismon] place strong repercussions onto the opponent for casting simple actions like attacking or destroying a Security Card. In addition, Purple contains strong cards that can easily delete the opponent's Digimon, although there usually exists limitations for doing so. Notably, certain Digimon like [BT2-074 Devimon] and [BT3-080 Saberdramon] carry the <Retaliation> effect, which in exchange for the Digimon being deleted in battle, is able to delete the Digimon that it was defeated in battle by. Furthermore, strong options like [BT2-110 Trump Sword] and [BT4-112 Hell's Gate] are strong ways to delete opposing Digimon, but are limited to targets that are either unsuspended or are of Lv.6 or higher respectively.

Purple has a greater synergy with using Option cards than any other Colour. Cards like [BT3-091 Lilithmon] and [BT3-096 Mimi Tachikawa] grant the player memory when they playing an Option, effectively lowering the cost of using Options. Even more notably, cards like [P-027 MetalGarurumon] and [BT4-089 Plutomon] have effects that allow the player to play an Option card without paying its Play Cost. This allows the player to use the aforementioned powerful Options like [ST6-16 Nail Bone] or [BT4-112 Hell's Gate] at no cost, granting them massive advantage and especially so in conjunction with the cards that gain the player memory for playing an Option.