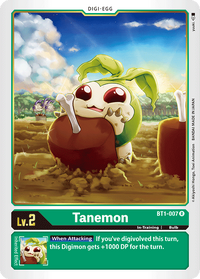 Green (緑 midori) is one of the seven Colours in the Digimon Card Game. It was first introduced in BT-01: Booster New Evolution as the fourth main Colour in the game.

Green contains an abundance of Digimon with insectoid or botanical motifs, as well as simply any Digimon that is green in colour. Common Types found in Green Digimon include Insectoid and Vegetation.

Green is a ramp-style Colour with quick ways to digivolve Digimon as well as several tools of control to hinder the opponent. Green cards are often capable of digivolving efficiently, containing many tools to draw Digimon cards of higher levels and ways to digivolve at a lower cost. In addition, many Green cards possess effects to suspend opposing Digimon, stopping attacks and allowing them to be attacked. Common keywords in Green include <Digisorption>, <Piercing>, and <Digi-Burst>.

Green has a ramp-based strategy that allows the player to digivolve their Digimon easily, possessing effects that allow the player to easily draw into their supply of higher level Digimon and ways to lower digivolution cost. As seen in cards such as [BT1-074 Togemon] and [BT2-044 Tyrannomon], Green has a plethora of ways to add higher level Digimon to the player's hand, adding consistency to the digivolution process.

Green also contains a large amount of effects that suspend the opposing Digimon, being a worthy tool of both offense and defense. Defensive suspension effects can be found on cards such as [BT1-082 Rosemon] and [BT1-110 Flower Cannon], allowing the player to suspend the opposing board before they are able to make an attack. Offensively, suspension effects can be used to suspend opposing Digimon, making an otherwise invulnerable Digimon vulnerable to attack. This is often complemented by cards with the <Piercing> effect, examples being [ST4-13 HerculesKabuterimon] and [BT1-083 GranKuwagamon], allowing the player to attack the now-suspended Digimon while damaging the opponent's Security.

Green has a greater synergy with the <Digi-Burst> mechanic than any other colour. Aside from containing many powerful wielders of the <Digi-Burst> effect such as the aforementioned [ST4-13 HerculesKabuterimon] and [BT4-062 Nidhoggmon], many Green cards also have extended pieces of support for the mechanic that few other colours have, examples being [BT4-107 Pollen Spray] and [BT4-095 Yoshino Fujieda]. In addition, cards like [BT5-056 Rafflesimon] and [BT5-102 Wisselin] create a control-based playstyle for dedicated Green <Digi-Burst> decks, preventing opposing Digimon from attacking and blocking in conjunction with other <Digi-Burst> effects.