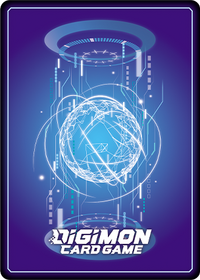 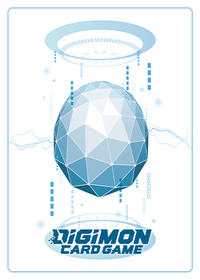 This is the information on how to play the 2020 Digimon Card Game.

Setting up the Game 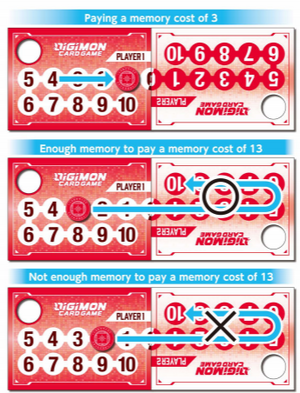 This game uses a Memory Gauge (memory) system to pay the memory costs of cards. For example, to pay a memory cost of 3, you would need to move your memory counter 3 spaces to the right.

During your turn, if the memory counter lands on a number greater than 0 on your opponent's side of the Memory Gauge due to costs or other effects, your turn ends and it becomes your opponent's turn after all other cards and effects resolve.

Neither player can have more than 10 memory. To pay a memory cost exceeding 10, you must be able to move the memory counter that many spaces. For example, you won't be able to play a card with a memory cost of 13 unless you have at least 3 memory.

Digimon that are played are typically placed upright in the unsuspended state. After performing an action such as attacking or blocking, they are rotated sideways to show they are in the suspended state. 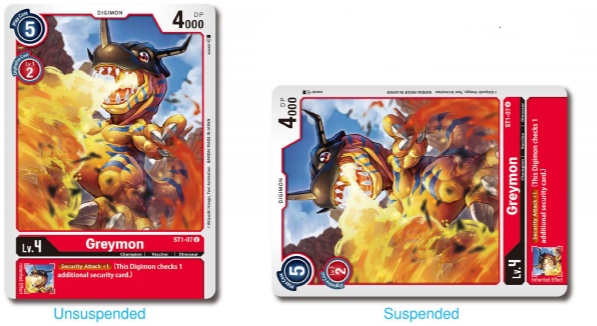 Gameplay consists of the following four phases, starting with the player who goes first.

Players can play Digimon cards from their hand to their battle area.

First, place the Digimon card you want to play in the battle area unsuspended.

Next, pay the play cost of that Digimon card. The Digimon is now played in the battle area.

Digimon can't attack on the turn they were played. There's no limit to how many Digimon can be placed in the battle area.

Players can digivolve the Digimon in their battle area or breeding area.

Players can activate the main effect of Option cards from their hand. To use an Option card, you must have at least one Digimon or Tamer of the same colour as the Option card in your battle area or breeding area.

Digimon in the battle area can make attacks.

If the checked card has a security effect, that effect is activated.

If a Digimon card is flipped over, that card becomes a Security Digimon, and does battle with the attacking Digimon. Just like when a Digimon is attacked in the battle area, the Digimon with the higher DP wins.

Security Digimon also can't activate any of their effects, with the exception of [Security] effects.

If the attacking Digimon is defeated, they are deleted, and the attack ends.

Regardless of the battle's outcome, the Security Digimon is placed in the trash after the battle ends.

The card is placed in the trash unless the card has a security effect that allows it to be played or added to the player's hand.

If there is nothing left for you to do during a turn, you can pass the turn to your opponent. When you pass your turn, the memory counter automatically moves to 3 on your opponent's side regardless of where it was before passing.

The memory counter remains where it was at the end of the turn.

If one of the following occurs, you win the game:

What happens if a Digimon's DP falls to 0?

Digimon don't lose DP when they are attacked, but they can temporarily lose DP from effects. If a Digimon's DP drops to 0 from an effect (it can't drop below zero), that Digimon is deleted and placed in the trash.

For a Digimon with abilities such as <Security Attack +1>, where a single attack requires checking multiple security cards, perform one check at a time.

What happens when a player has no Security Cards?

If there are no remaining security cards, yet an effect such as <Security Attack +1> allows for further security checks, the attack ends there. The game continues even if a player has 0 security cards at this point.

The opponent must make another successful attack against the player that has 0 security cards in order to win.

Defend Yourself with <Blocker>

Some Digimon have <Blocker> ability. Digimon with this ability are able to block an opponent's attack, taking the attack themselves.

When a <Blocker> is used, the target of the attacking Digimon's attack switches to the blocking Digimon and they do battle.

What happens when a Lv. 2 Digimon enters the Battle Area?

Effects that make you Gain or Lose Memory