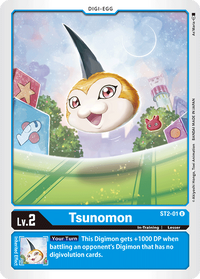 Blue is notable for containing many cards associated with the secondary protagonists of the various Digimon anime series, such as their partner Digimon or the characters themselves as Tamer cards. The Digimon cards found in Blue are often Digimon based on mammals like canines or canids, as well as marine or water-based Digimon. Common Types found in Blue Digimon include Beastkin or Sea Beast.

Blue is a Colour focused on both control and combo-making, containing effects that reduce the opponent's options of counter-play. Blue cards are often capable of hindering the opponent's game plan by removing the opponent's access to Inherited Effects, as well as making attacks that are difficult to counter by utilizing unsuspending effects to attack multiple times and <Jamming> to negate battles with Security Digimon. In addition, Blue cards often possess effects to return opposing Digimon to the hand, removing them from the field while bypassing [On Deletion] abilities. Common keywords in Blue include <Jamming>.

In addition, many Blue decks contain Digimon that are capable of making attacks that are difficult to counter against. As seen in [ST2-11 MetalGarurumon] or [BT2-032 UlforceVeedramon], these Digimon contain effects that unsuspend themselves during its owner's turn, allowing them to either make more attacks or to remain unsuspended and prevent itself from being attacked the next turn. In addition, while many Red Digimon see a weakness in simply having its attack be stopped by opposing <Blocker> Digimon, Blue's ability to make multiple attacks makes it difficult to stop even in the face of blockers.

Aside from unsuspension effects, Blue also sees a variety of Digimon containing <Jamming>, preventing the Digimon from being destroyed in a battle with Security Digimon. This allows it to bypass one of the usual risks of making a Security Attack, and forces the opponent to counter by either blocking with a Digimon with a higher DP or to attack it after it has been unsuspended. Particularly notable examples of <Jamming> in Blue include [BT4-030 BeoWolfmon] and [BT3-031 Imperialdramon Dragon Mode]. The former is able to reduce the risks of attacking even further by being capable of preventing itself from being targeted with attacks, while the latter is able to combine <Jamming> with unsuspending effects found on itself and [BT3-027 Paildramon] to make multiple attacks without carrying the risk of being destroyed by a Security Digimon.

Blue also contains removal cards in the form of returning opposing Digimon to the opponent's hand, and discarding its digivolution cards in the process. Although limited to targets below a certain level threshold, cards like [BT2-030 MetalSeadramon] containing these effects offer a competent way to remove opposing threats while bypassing the commonly found [On Deletion] effects. In addition, cards like [BT4-035 MirageGaogamon] take advantage of this mechanic by increasing the number of cards in the opponent's hand through returning their Digimon to their hand, and granting bonuses based on this number.