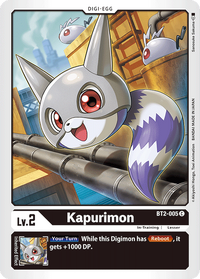 Black (黒 Kuro) is one of the seven Colours in the Digimon Card Game. It was first introduced in BT-02: Booster Ultimate Power as the fifth main Colour in the game.

Black contains an abundance of Digimon with mechanical or cyborg motifs, as well as Digimon that are black in colour. In addition, Black also features a notable amount of Digimon associated with glitches and viruses, such as the [Diaboromon] digivolution line. Common types found in Black Digimon include Machine and Cyborg.

Black is a very defensive Colour, containing many <Blocker> Digimon and effects that aid its defensive prowess. Black also contains the majority of the cards that possess the <De-Digivolve> effect, acting as a unique form of stun and control. Common keywords in Black include <Blocker>, <Reboot>, and <De-Digivolve>}.

As a Colour focusing on defensive strategies, Black has more <Blocker> Digimon than any other Colour, giving Black an advantage in defending opposing attacks. In addition, cards like [BT2-089 Tai Kamiya] and [BT4-072 Gogmamon] offer the ability to boost the DP of the player's Digimon even during opponent's turn. This strengthens the DP of <Blocker> Digimon, as well as simply decreasing the susceptibility of allied Digimon to opposing attacks.

In addition, Black also contains the versatile <Reboot> effect. Held on Digimon cards like [BT3-073 CresGarurumon], it allows the Digimon to make attacks while offering it protection against attacks on the following turn. <Reboot> is further supported by cards like [BT2-057 Greymon] and [BT2-063 MetalGreymon], which serve as effective ways to boost the offensive capabilities of Digimon with the effect. Defensively, <Blocker> Digimon that also carry the mechanic, like [BT2-065 WarGreymon], are able to attack during its owner's turn, while still being available to block during the following turn.

Many cards can also grant <Reboot> to cards that don't already naturally have carry effect, examples being [BT2-055 ToyAgumon] and [BT4-109 Final Zubagon Punch]. Final Zubagon Punch, for example, can grant <Security Attack +1>, <Reboot>, and <Blocker> to Digimon with high DP, giving it powerful capabilities both offensively and defensively.

Black also carries a unique tool of control in the form of the <De-Digivolve> mechanic, seen in cards like [BT2-105 Spider Shooter] and [BT3-064 TiaLudomon]. While not a direct form of removal, <De-Digivolve> is able to depower larger threats to a weaker form at a lower cost compared to the forms of removal found in other Colours, which often require a higher cost to remove a larger threat. Less notably, Black does offer tools of direct removal, such as [ST5-16 Genocide Attack], although they are restricted to targets below a certain Play Cost threshold.

Digimon associated with [Diaboromon] focus on spawning [Diaboromon Tokens]. The Digimon focus on playing multiple Digimon with the same name, and using the Tokens to facilitate those conditions. Many of this deck's boss monsters are White Digimon.